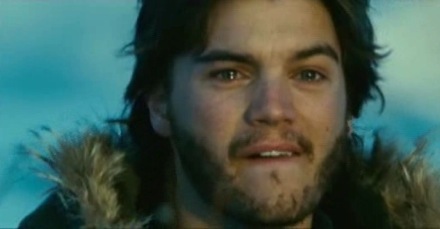 In this interview Jon Krakauer talks about Christopher McCandless and what drew him to the story of the young man who went “into the wild”. He says he felt a visceral tingle when he first read reports of the hunters who had found the then unidentified body of the young adventurer

And from the original article on which Into the Wild is based:

McCandless’s personality was puzzling in its complexity. He was intensely private but could be convivial and gregarious in the extreme. And despite his overdeveloped social conscience, he was no tight-lipped, perpetually grim do-gooder who frowned on fun. To the contrary, he enjoyed tipping a glass now and then and was an incorrigible ham who would seize any excuse to regale friends and strangers with spirited renditions of Tony Bennett tunes. In college he directed and starred in a witty video parody of Geraldo Rivera opening Al Capone’s vault. And he was a natural salesman: Throughout his youth McCandless launched a series of entrepreneurial schemes (a photocopying service, among others), some of which brought in impressive amounts of cash.Upon graduating from high school, he took the earnings he’d socked away, bought a used Datsun B210, and promptly embarked on the first of his extemporaneous transcontinental odysseys. For half the summer he complied with his parents’ insistence that he phone every three days, but he didn’t check in at all the last couple of weeks and returned just two days before he was due at college, sporting torn clothes, a scruffy beard, and tangled hair and packing a machete and a .30-06 rifle, which he insisted on taking with him to school….McCandless could be generous and caring to a fault, but he had a darker side as well, characterized by monomania, impatience, and unwavering self-absorption, qualities that seemed to intensify throughout his college years. “I saw Chris at a party after his freshman year at Emory,” remembers Eric Hathaway, “and it was obvious that he had changed. He seemed very introverted, almost cold. Social life at Emory revolved around fraternities and sororities, something Chris wanted no part of. And when everybody started going Greek, he kind of pulled back from his old friends and got more heavily into himself.”